By: Sandra Kinsler and Brian Leshon 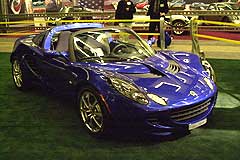 Lotus Cars debued the U.S. specification version of its famous Elise sports car at the 2004 Greater Los Angles Auto Show. The Elise is scheduled to go on sale in May 2004 as a 2005 Model.

Lotus is not a well know brand in the United States. However it is recognized worldwide as a one of the premier builders of true sports cars. The company was founded by automotive engineering pioneer, Colin Chapman, in the mid 1950s.

The Elise has been available in Europe for seven years, but is just now coming to the U.S. market. The delay was caused by the need for Lotus to adhere to U.S. passenger vehicle legislation.

Lotus did a study of the American market and found that there is demand for light weight, high-performance sports cars. The Elise's chassis is small and very light weight -- weight has always been a Lotus performance feature. The mid-engine confiquration gives the best possible handling as all the weight is balanced between the centerline of the front and rear drive wheels.

Styling inside and out is pure race car. Large flared wheel wells house large tires. Seating is low (like the old Europa) so the driver is almost laying down in the driver's seat -- perfect for racing. The interior is deliberately spare to keep the car as light as possible. The rear deck flares up into a small spoiler at the rear of the car for added downforce.

The 2005 Lotus Elise will be powered by Toyota's 1.8-liter, 16- valve, VVTL-I engine found in the Celica GT. The engine has been modified by Lotus to deliver 190 horsepower. This is a tremendous books in power over that of the European Rover power plant which produces only 125 horsepower.

Although the addition of comfort features, like air conditioning, have been added for the U.S. market the additional weight is minimal. With the increased horsepower from the Toyota engine, the power to weight ratio is as good as ever. The low weight and good power gives the Elise super car performance, and faster acceleration than a Porsche 911, at a fraction of the cost.

Lotus expects to sell several thousand of the Elises each year in the U.S. through its network of 38 dealers. However, with a base price under $40,000, and a loaded version for only $45,000, demand for the Elise should be very high.

Get a great loan on your next car

Get a FREE quote with 21st Century Insurance.
Click Here.

Looking for a used car? Get a FREE VIN check at AutoCheck®.